If Rhino crashes, two files are created on your desktop: RhinoCrashDump.dmp and RhinoCrashDump.3dm. The .3DM file is Rhino's last ditch effort to save the model. The .dmp file can be used in Visual Studio to find the place in the source code where a Rhino plug-in crashed.

Analyzing crash dumps is not a quick and easy way to diagnose crash bugs. If a crash is repeatable, do not use crash dumps. Simply debug the crash by running the command in the debugger.

In a crash dump, no heap is available and only a limited amount of stack is available. But with a little effort and thought, you can find the line where the crash occurred and see what arguments were passed to the functions.

Keep in mind you are debugging optimized code. Some values of local variables (like loop counters and frequently used doubles) are kept in CPU registers and cannot be viewed in a watch window.

If you read a RhinoCrashDump.dmp file in Notepad.exe and search for “RHINOCRASHINFO” you will find a block of text like the following:

<BUILD DATE> and <BUILD TIME> are the date and time the .cpp file that contains the crash dump exception handling code was compiled.

Open the RhinoCrashDump.dmp“ file in Notepad.exe and search for RHINOCRASHINFO. Then look for B u i l d V e r s i o n = ” YYYY - MM - DD “… YYYYMMDD is the build that crashed. If you are lucky, the other RHINOCRASHINFO values will give you a hint about what crashed. Common Rhino build versions are:

Step 2. Get the build of Rhino that crashed

To analyze the crash dump file, you need the build of Rhino on your system that produced the crash dump. If you do not have the same build, download it from the Rhino web site.

After you determine the version of the crashed Rhino, copy the RhinoCrashDump.dmp into the same directory as the Rhino4.exe file. In most cases, this will be the following folder:

Over your plug-in's life, you are likely to see many crashes. So do yourself a big favor and rename the RhinoCrashDump.dmp file something descriptive.

Also, copy your plug-in's release .RHP and .PDB files into the same folder.

Start a new instance of Developer Studio and from the menu use:

to bring up the Open Solution dialog box. In the Files of type: droplist box select Dump files (.dmp; .mdmp). Then navigate to the Rhino System folder and double-click on RhinoCrashDump.dmp. It may also be possible to double-click on the .dmp file from Explorer and have Developer Studio open it.

Once the dump is loaded (it doesn't take long), press the F10 key. When you are prompted to save RhinoCrashDump.sln, click the Save button. The Output window will pop up and you can watch as the debugger attempts to reconstruct the state of the executable when the crash occurred. This can take a while, especially if the debugger has to go to an external symbol server to download symbols.

Eventually an error message box will pop up with Break/Continue/Ignore/Help buttons. Click Break and examine the call stack for hints about what when wrong.

You must have symbol information when you debug applications with various Microsoft tools. Symbol files provide a footprint of the functions contained in executable files and dynamic-link libraries (DLLs). Also, symbol files can present a roadmap of the function calls that lead to the failure point. For example, you must have the symbols when you dump call stacks inside a debugger. 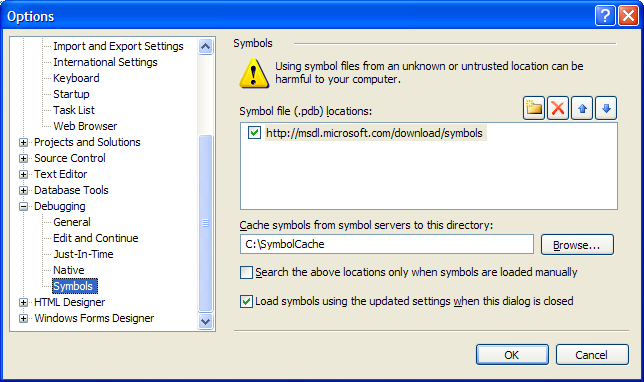 Below is a sample C++ plug-in that will crash Rhino. To test out crash dump analysis, download and build the plug-in. Then, launch Rhino and load the plug-in using the PlugInManager command. Then run the TestSdkCrash command. While the McNeel Error Reporting dialog displays, copy the RhinoCrashDump.dmp from the desktop to another location, and then click Don't Send. Then follow the steps above to analyze the crash dump.