In version 3.0, Rhino introduced support to ActiveX Automation. Using Rhino 3.0, it was possible to control, or automate, Rhino from an external application written in a language that supported COM, such as Microsoft Visual Basic.

The Rhino 3.0 implementation did have shortcomings. If a copy of Rhino 3.0 was already running, you could not create new instances of the Application object using CreateObject (VB) or CreateDispatch (C++). For developers writing utilities that hook onto a running copy of Rhino, this was more of a feature than a problem. But, for developers using Rhino as an invisible file conversion engine, this could be a problem, especially if Rhino was already running and had a model opened for editing.

For those developers who want to hook onto a running instance of Rhino, the new Application object behavior found in Rhino 4.0 will cause problems. So we have added a new Interface object (Rhino4.Interface) that works like Rhino 3.0’s Application object. When you create the Interface object, if an instance of Rhino is already running you will be given a reference to this existing Interface object. If Rhino is not running, it will launch and you'll be given a reference to this newly created object.

If you are writing an application that automates Rhino 4.0, you will have to decide which automation object to use.

But this flexibility can also cause problems when trying to get this object from an automation-aware application. Often, by the time your application has created the Automation (or Interface) object and is ready for RhinoScript, Rhino has not had sufficent time to load the RhinoScript plug-in. So you get a runtime error.

The solution is to make your application wait after creating the Application (or Interface) object, before attempting to get RhinoScript. Perform this delay by using the Win32 API Sleep() function. For example:

Rhino Schemes are different sets of Rhino options stored in the Windows Registry. Everything in the Options section of Rhino can be stored in a scheme. This way Rhino can start with different combinations of workspaces, languages, colors, etc. depending on the need or the user. Just start Rhino from the appropriate desktop shortcut. The schemes exist independently of each other, and can be modified as desired.

Note: This registry key only works if Rhino launches via ActiveX automation.

The super-sneaky registry key is: 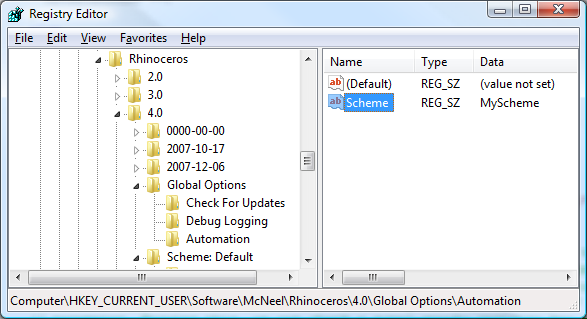