Draws an arc from center, start and end points, tangent, radius, and direction.

Where can I find this command? 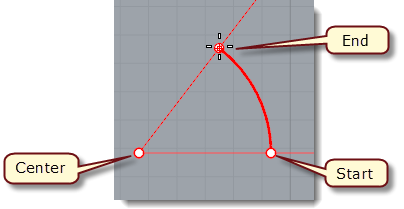 To draw an arc with the default center, start, end option

Deformable
The Deformable option draws a NURBS approximation of an arc that has control points making it deformable by editing its control points. Two settings are added to control the degree and point count of the arc.

Deformable settings
Degree
Specifies the degree of the curve (or surface). When drawing a high-degree curve, the output curve will not be the degree you request unless there is at least one more control point than the degree.

Tilted
The Tilted option draws an arc whose plane is tilted from the current construction plane. The option is available after you pick the Center location for the default arc starting from the center.

Direction
Specifies the direction of a line tangent to the arc's first end point.

ThroughPoint
Specifies a location the arc curve must pass through.

Center
Specifies a center point for the arc's radius.


Direction
Sets the direction for drawing the arc.

Clockwise
Draws the arc in a clockwise direction from the startpoint.

Tangent
Draws an arc tangent to two curves with an option to specify a radius.

Tangent options
Point
Releases the command from the tangent constraint. Pick a point not on the tangent curve for the arc to pass through.

FromFirstPoint
Forces the arc to go through the first picked point on the curve instead of allowing the point to slide along the curve.

Radius
Specifies a radius. If a tangent point exists on the second curve that meets the radius requirement, the tangent constraint will appear at that point as you drag the circle.

Extension
Extends any curve with an arc by picking the end location of the arc extension. 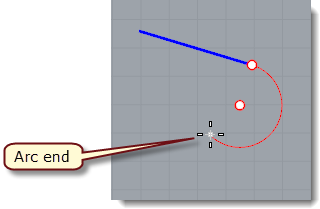 Extension option
Center
Extends a curve with an arc by picking the arc's center and endpoint. 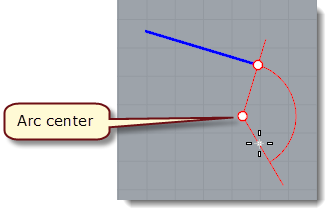