Product: Zoo
Summary: Discusses how to determine the name of the system running the Zoo

I recently bought two copies of Rhino to share among five systems. So, we have installed the Zoo and added the two Rhino licenses to it.

After installing Rhino, I have tried starting it. In the dialog box that appears, I click the Detect Zoo Server automatically option and then press the Test Connectivity button. 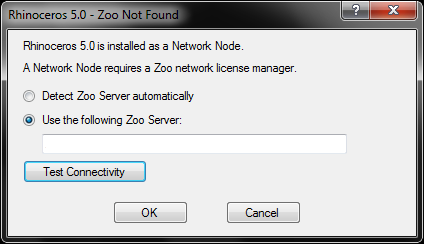 But, Rhino just tells me that I cannot detect my Zoo server. What should I do?

If Rhino cannot automatically detect your Zoo server, because you have not added a “default” Zoo server entry on your company's DNS server, then just manually specify the hostname or IP address of the system running the Zoo.

If you are not sure what the hostname of the system running the Zoo server is, then use ZooAdmin to discover it.

In this example, the fully qualified hostname is “zoo.mcneel.com”.