Retina displays and Rhino for Mac

In June 2012, Apple announced MacBook Pro computers with Retina displays – displays with a much higher resolution than previously available on an Apple laptop. This required extra work by software developers to adapt to this new display technology.

For a long time, all Apple displays had a pixel density of approximately 100 pixels per inch (PPI). When designing dialogs, software developers laid out a dialog by specifying the height and width of text fields and buttons in pixels. They also specified their location on the screen in pixels.

The new Retina displays had 220 PPI, so the old conventions no longer worked.

Apple updated all the controls and text drawing so that buttons and text drawn on a Retina display draw using twice as many pixels and all applications continue to work as before without change. But graphics programs like Rhino need updated to take advantage of the new Retina displays.

As we mentioned, macOS now generally works by using points for its drawing. But when Rhino is drawing your model in a view, it needs to know the size of a view in pixels, not in points. So Rhino queries macOS to determine this, and uses the appropriate pixel values when drawing. If you visually compare your model on a non-Retina display (like a 2012 MacBook Air) with the same Rhino model on a Retina display, you will see that the Retina version is much crisper and clearer. Rhino is drawing four times as many pixels when drawing to a Retina display.

Screen resolution should be set to Best (Retina)

The displays on the 2012 15“ Retina MacBook Pro computers are 2880 pixels wide by 1800 pixels high. In System Preferences > Displays, Apple gives you the option of using a scaled resolution. Changing this is generally a bad idea for Rhino for Mac. For example, do not use the scaling setting below. See the comment Using a scaled resolution may effect performance? That is very true in Rhino for Mac. 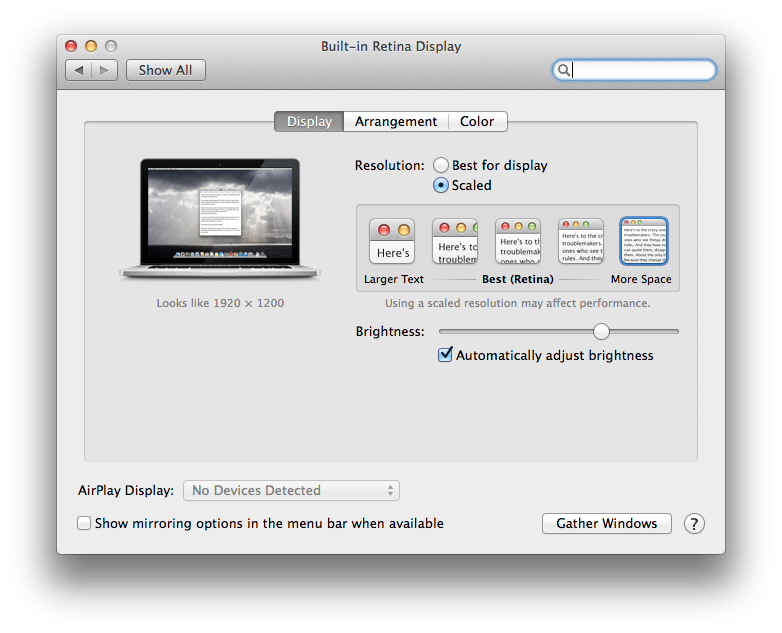 To measure the difference these settings make, we instrumented Rhino to report the actual viewport sizes. We started Rhino and made the Rhino drawing window full screen and a single viewport. Here's what Rhino reports when you use the last three System Preferences settings:

Since Rhino already pays attention to the physical size of your display, it always makes sense to keep your display resolution set to Best for display or, if the Scaled selection is picked, Best (Retina).