Basically, Rhino Schemes are just different sets of personalized options that can be called from a specific desktop shortcut. Everything in the Options section of Rhino can be stored in a scheme (with the exception of display modes). In this way, Rhino can be started with different combinations of workspaces (*.rui files), languages, colors, etc., just by starting Rhino from the appropriate desktop shortcut. The schemes exist independently of each other, and can be modified.

By default, one scheme is always created (Default), and any modifications will automatically get saved to that. To have more than one scheme, you must specifically create new ones. This page explains how to do that.

A newly created scheme will always start with the default set of options (as if Rhino was freshly installed). If you want to duplicate an existing modified scheme, there isn't yet a direct, one-button way to do that. For this reason, this page also outlines several methods to duplicate existing schemes.

How to create a new scheme and desktop shortcut

1. Create a new shortcut on your desktop which points to your new Rhino scheme. The easiest way to do this is to copy an existing Rhino shortcut. Hold the Control key down while dragging the default Rhino icon to a new location on the Desktop, or right-click and copy it.

2. Right-click on the copied icon. From the menu, click Properties.

3. On the General Tab, edit the name: Rename it to something that will identify the scheme with which you are starting Rhino.

4. On the Shortcut tab, edit the Target path. Add a switch for the new scheme:
(The example path below is for Windows Vista/7/8, Rhino 5 64 bit. Others are similar.)

– Make sure there is a single space before the /Scheme=… 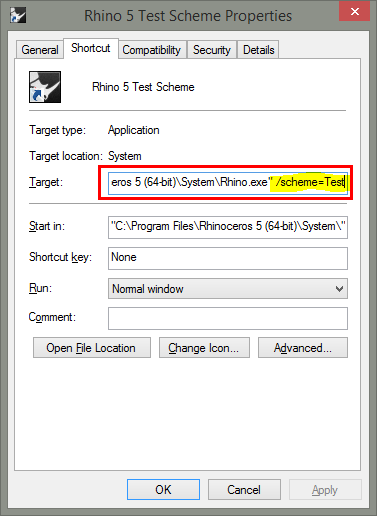 5. The new scheme should start from this shortcut with a new set of default Rhino settings that you can change without affecting the original Rhino scheme. Change the options to what you want while in this instance of Rhino. These changes are automatically saved under the new scheme.

This requires you have Rhino V4, or V3 with Bonus Tools installed.

While in the instance of Rhino whose scheme you want to duplicate: (Make sure only this instance is running!)

How to duplicate a scheme by editing the registry

Note: Be extremely careful when registry editing! If you use the above method, this is usually not necessary.

Note: It is not currently possible to control the loading or unloading of plug-ins with Schemes. Plug-ins are either loaded or unloaded for all schemes at the same time.

Important: If different schemes share the same workspace (.tb) file a change made to the toolbar layout by one instance will affect all others that use it! The toolbar layout in the .tb file is independent of schemes – the scheme only knows which .tb to open, not its structure. If you have multiple instances of Rhino running, the last instance to close will overwrite the .tb file. So when making toolbar changes, it is advisable to have only one instance of Rhino open at a time. If multiple users are using personalized workspaces, it is best to have separate workspaces with separate names and have each one open with the corresponding scheme.