Summary: Tips and techniques for using Rhino 4.0 to prepare files for Solidscape printers and ModelWorks.

New support for Solidscape in Rhino 4 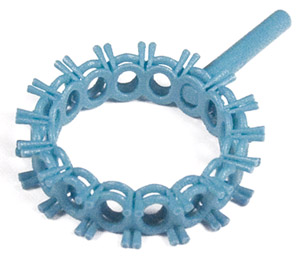 In Rhino 4 we added new technology to prepare files for the Solidscape printers and their software ModelWorks. This new technology has many benefits over the traditional STL file transfer methods:

Solid requirements before going to Solidscape

One of the major differences with the new process is that you do not have to Boolean the objects you are printing into one single solid. Now, solids that overlap will be built into one object. 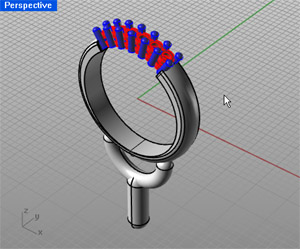 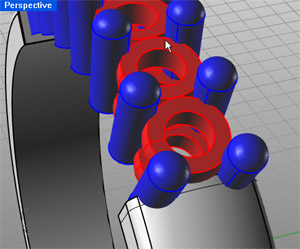 For the ring example above, the ring, prongs, sprue and collets are modeled as separate solids. During the ModelWorks command, these objects will become one solid as long as they physically overlap. This lets you export a much greater range of models and keep the models in a configuration that is easier to edit.

Note: We require that each object be a solid and water tight. In this case each prong is its own solid. The ring needs to be a solid and the collets are solids.

You can check for Naked Edges to see if all objects are solid.

Two ways to communicate with Solidscape

There are two ways to get models to the Solidscape machine.

Steps for using the ModelWorks command in Rhino

If you use the Print3D command or the ModelWorks command in Rhino you will end up with this dialog. 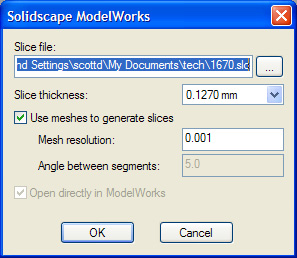 In the Slice file edit box, enter the name of the SLC file you want to save. The button to the left with the three dots lets you browse for a location for the file.

The Slice thickness drop down lets you set your build thickness.

The Mesh resolution value represents the furthest distance the mesh will be from the original NURBS surface. The smaller this number the more accurate the mesh, but the more memory it will take.

The Open directly in ModelWorks check box will be active if Modelworks is loaded on your machine. This will open the model automatically in ModelWorks after exporting the SLC file.