There are issues with Rhino version 4 on the Wacom tablet driver and Windows Vista (including Vista Home, Vista Premium, and Vista Ultimate).

There are two workarounds that allow the flyout toolbars and menus in Rhino to view normally. 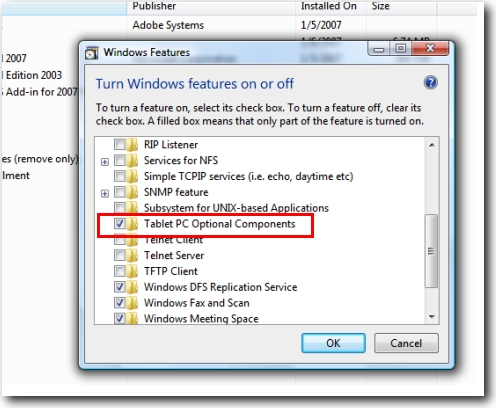 According to Microsoft, Tablet PC control adds or removes accessories such as Tablet PC Input Panel, Windows Journal, and the Snipping Tool. Enabling this feature also installs software that enables handwriting recognition. This feature is not necessary to install unless you have a Tablet PC. But, if you don't install it you will not have access to the Snipping Tool, a handy application. The Snipping Tool lets you select a section of your screen that you would like to take a snippet, or screenshot.

HP's notebooks sometimes use a fingerprint scanning product developed by DigitalPersona. Their scanning product causes the same button tooltip problem on flyout toolbars on Rhino 4.0 that is normally caused by Vista/Windows 7's Tablet PC components when a tablet is installed. If turning off Tablet PC components doesn't solve the problem, check the computer for a fingerprint scanner or any related applications, especially the ones that come from DigitalPersona.

A case we have from a user on 21-Jan-2011 was a HP TouchSmart tm2-2012tx. It has HP SimplePass Identity Protection installed that installs applications from DigitalPersona. The application that causes the problem is C:\Program Files (x86)\DigitalPersona\Bin\DPAgent.exe. To solve the problem, turn the DpAgent.exe *32 off from the Windows Task Manager. Rename it with a different name to prevent it from running automatically when Windows starts.

Some have seen this problem of linked toolbars not flying out without a Wacom tablet. Several have reported that if a wireless Logitech mouse is used with a Microsoft mouse driver, the toolbar flyouts don't work. Matching up the mouse hardware and driver seems to fix the problem. -JB

This problem was partially fixed with V4 SR4. A problem remains with displaying Tooltips in cascaded (flyout) toolbars. We continue to recommend turning off the Tablet PC Optional Components. -JB