Summary: The Rhino RDK is a collection of tools that extend the Rhino 4.0 application platform with visualization specific capabilities.

Please note that all features of the Rhino 4.0 SDK are included in Rhino 5 by default. You do not need to download and install either the plug-in or the SDK for Rhino 5.

Note: The RDK feature set underpins the Brazil for Rhino product, and all of the above features are supported in that product. However, all of these features are available to third party developers to integrate their products into Rhino.

Note: A complete version of this text is part of the SDK download below.

Note: When developing your RDK-aware render plug-in, you need the SDK installed on your workstation. The RDK installs into the same folder as the Rhino 4.0 SDK and requires the Rhino SDK to be installed first.

Note: When distributing your plug-in, you need to include the RDK installer as part of your own plug-in installer. To do this, simply install the RDK plug-in installer into the temp folder, and run it using the /silent command line option.

Note: The SDK installer includes a demonstration project called Marmalade which you will find in the C:\Program Files\Rhino 4.0 SDK\Marmalade folder. This plug-in shows how to set up your paths for header and lib files, and demonstrates many common RDK tasks such as creating custom materials and using the frame buffer. 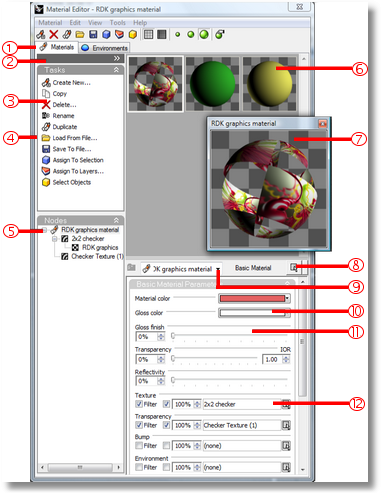 The material editor, environment editor, and texture palettes interact with the enhanced render content system. All are based on a similar interface with only small functional differences between them.

Access the editors through the Rhino Render menu, the Rendering2 toolbar, or the editor commands.

Lists of materials, environments, and textures are stored in the Rhino document. Each editor displays the relevant render content type as preview thumbnails.

A large button to the left of the editor controls the visibility of the editor side panel which displays a list of common tasks along with the structure of the currently selected material, environment, or texture.

Adjust the size of the preview thumbnails area by dragging the handle just below their lowest edge.

Contents display an interface below the preview thumbnails in an area reserved for collapsible UI panels. As an addition to the basic UI panels, Rhino provides several more collapsible panels within the same area as the content UI. These include the Texture Summary panel, the Notes panel, the Local Mapping panel, Graph panel, and the Adjustment panel. Descriptions are in the content UI section.

Each material, environment or texture can have child nodes. The children can be of any content type, but specific child slots will only support specific types. The most common child type is a texture. For example, the Texture child for a Basic Material will only support textures, as will the Background image slot on a Basic Environment. 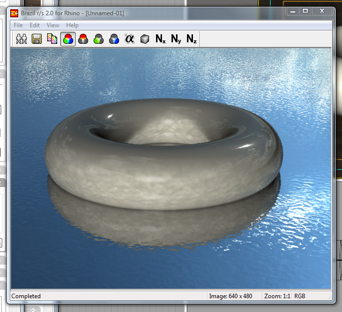 Many renderers call the render window the frame buffer. The terms are nearly interchangeable. 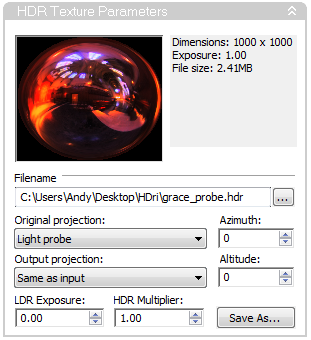 An HDR image which provides automatic conversion to a bitmap for non-HDR capable renderers. This lets the Rhino renderer and viewport display show HDR environments while providing HDR tools to third-party renderer engines.

The HDR texture also provides projection conversion features. Most HDRi files come as Light Probe projection. The Basic Environment requires Spherical (Equirectangular) projection for spherical environments, so the HDR texture defaults to this conversion. However, several other types are supported.

The LDR exposure determines the brightness of the image when converted to a bitmap image. This will not affect the rendering when used by a HDR capable renderer.

HDR multiplier is a simple linear multiplier on all values in the image. This can be used to brighten or dim the image in an HDR capable renderer.

Azimuth and Altitude values change the way the image is rotated in space during the projection conversion.

Sun tools, including a docking panel to control the document sun, a sunlight preview within the Rendered viewport, a Sunlight command, and a several other scripting and developer tools make sun angle calculations easier.

Decals are non-repeating textures that are applied to the surface of an object with a given projection. They are an easy-to-use way of attaching single images or similar textures to objects without going through the complexity of the texture mapping process.

Decals are textures that are placed directly on a specified area of one or more objects. Use decals to change a limited part of an object's color.

Decals consist of a single instance of a texture, rather than being tiled as they are when used in a material.