Keyboard Shortcuts in Rhino for Mac

This article describes how to use and customize keyboard shortcuts in Rhino for Mac.

You can also define your own set of keyboard shortcuts, which we discuss below, so you need not mention any keyboard shortcuts that are specific to your use of Rhino for Mac. You can always add these special assignments to your own copy of Rhino. Please limit your suggestions to the changes that should be universally available.

I mentioned that some of the default keyboard shortcuts are not optimal. Some of the default keyboard shortcuts use keys available only on the keyboard with a numeric keypad. For example, View > Undo View Change is mapped to the Home key, but that key does not exist on laptop keyboards. Rather than completely eliminating these shortcuts, we thought it best to leave them in, making them available for those who can take advantage of them.

Other default keyboard shortcuts use the function keys (F1-F12, or F1-F19 on the numeric keypad version). Apple has added their own system-wide actions to the function keys, which makes them inconvenient to use in an application. You must hold down the fn key when you press one of the function keys for the program to see a “normal” function key press.

You can also switch the sense of the fn + function key in System Preferences > Keyboard > Keyboard. There is a checkbox labelled “Use all F1, F2, etc. keys as standard function keys”. This is not checked by default, but checking this makes using the function keys much easier in Rhino. Note that this is a system-wide setting and you will change the function key behavior everywhere on your Mac.

Note: In El Capitan, you'll also need to go into System Preferences > Mission Control, and change the Application windows assignment from the default of F10 to something else.

In Windows Rhino, you can add keyboard shortcuts. These shortcuts might be, but are not required, associated with an application menu item. In Windows, you enter the command string to be executed when a keyboard shortcut is typed.

Apple guidelines say that every application command should be available through the application menu. To enforce this, Apple supports menu shortcuts, the same concept as keyboard shortcuts on Windows, but Apple requires that these shortcuts always be attached to a menu item.

Rhino has a large and customizable set of commands. It is not practical to put every single Rhino command and all its variations in the application menu. Some less often used commands in Rhino need to be typed on the keyboard to execute them. This also means that, on the Mac, any command that is not already in the application menu can never have a menu shortcut attached to it.

We find that too restrictive for Rhino with its large command set, and have modified the typical menu shortcut assignment techniques to allow for keyboard shortcuts to be assigned to any command, not just commands in the application menu. 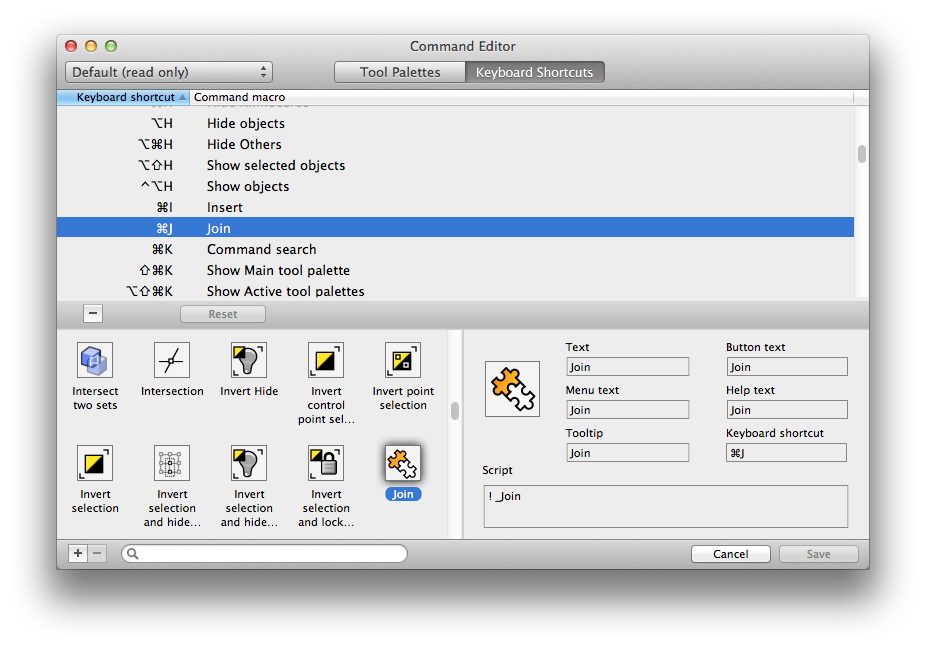 The list of default keyboard shortcuts is listed in the top half of the window. Clicking on one of the shortcuts selects the assigned command in the bottom half, along with displaying the command details in the lower right pane. There is a new field in this pane for defining a keyboard shortcut. 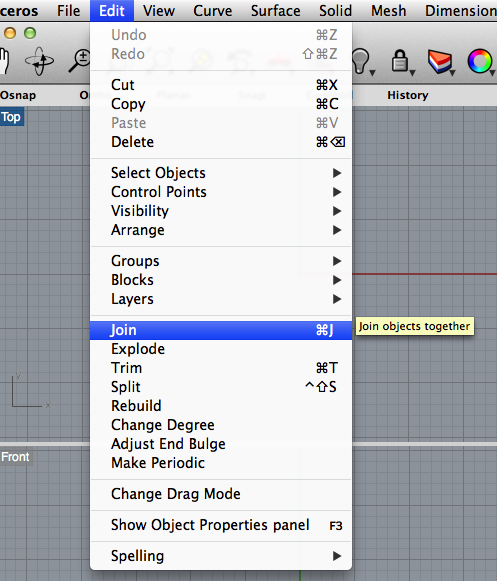 However, even if the shortcut is not referenced by an application menu item, the keyboard shortcut will still work in Rhino for Mac.

Defining your own keyboard shortcuts

To change the default command set, you must create a copy of it. Click the pop up menu button in the upper left corner of the Command Editor. It currently says “Default (read-only)”. Select the “Duplicate” option and choose a name for your new command set.

Note that all of the Rhino command shortcuts are listed, including ⌘C for Copy and ⌘Q to Quit Rhinoceros. You can create interesting confusion for yourself by deleting or reassigning standard Mac keyboard shortcuts to regular Rhino commands. It is certainly not recommended, but it is possible to do.

To add a keyboard shortcut, first find the command that will receive the shortcut by typing some part of the command's name in the search field in the lower left corner. Select the command button to display its details in the lower right pane. Click in the Keyboard shortcut text field and type the shortcut you want to assign. For example, if you want to assign Command-Shift-J to a command, hold down the Command key and the Shift key while typing the letter J to assign the shortcut. Almost all keyboard shortcut handling is disabled when typing in this field, so you can use almost any key combination for a shortcut. The Delete key still works, and you can use the Delete key to remove a shortcut assigned to a command.

Notes about your keyboard shortcuts

There is no error checking in the keyboard shortcuts you assign. Rhino lets you assign the same shortcut to more than one command. The resulting behavior is undefined. You can also assign shortcuts that are reserved by macOS, and these shortcuts won't work in Rhino. The operating system will perform the shortcut first.

The keyboard shortcuts are not restricted to key combinations with the Command, Option, Shift, or Control keys. As in Adobe Illustrator, you can assign an unadorned letter to a command. For example, you can assign C to the Circle command. Typing C when a command is not active will invoke the Circle command. If you do this, then you will not be able to type any Rhino command that starts with the letter C.

If you do assign unadorned letters to commands, you can still type any regular Rhino command by invoking the Command Search window with ⌘K, or selecting Tools > Commands > Search… in the application menu, and then type your command in the Command Search dialog.

Use Rhinoceros > Commands > “Your command set name” in the application menu to switch between command sets. The keyboard and menu shortcuts are instantly updated when you change the command set. No need to restart Rhino to start using the new command set.