What am I seeing when I assign a lens to a viewport?

When you assign a lens to a Rhino viewport using ViewportProperties, the resulting image you see is what that lens looks like on a standard SLR 36mm x 24mm film gate camera. If the viewport is not in a standard 1.5:1 aspect ratio, the minimum dimension is always 24mm. Calculate the major dimension by multiplying the minimum by the aspect ratio.

Why do different sized cameras result in different angles of view with the same size lens? 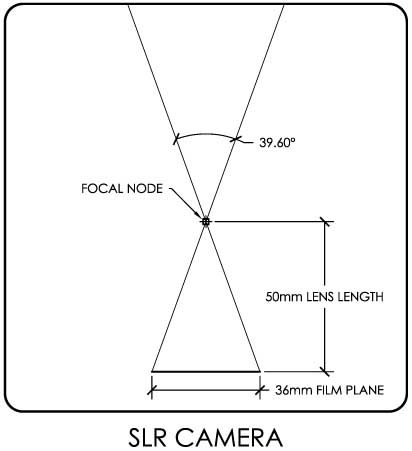 Now, if we pop that same 50mm lens onto a motion picture camera, the film plane size changes to 24mm (this format is called Super35): 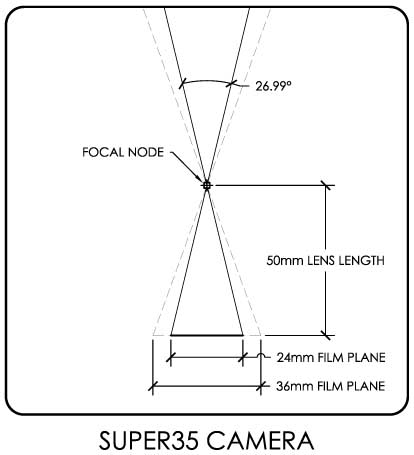 So although you are keeping the same lens length, by changing your film size, you change your field of view.

So how do I get the view angle I want when using a "non-standard" camera?

There is now a script to do the heavy lifting for you: http://en.wiki.mcneel.com/content/upload/files/Cam_Lens_090120.zip

For the nitty gritty of what the script is doing, read below:

The first thing you need to do is to figure out the aspect ratio of your viewport. The easiest way to do this is to use the command ViewportProperties with a “-” in front of it. From there you can select the Size option. The width divided by the height will be your aspect ratio, so a 2400 wide by 1000 high viewport would be 2.4:1, or for a viewport 300 wide by 500 tall, the aspect ratio will be 1:1.67

So if you were trying to see what your view angle would be with a camera with a 3“ x 5” film size (76mm x 127mm), you need to figure out what your crop multiplier is, the difference between Rhino's film plane size and the film plane size that you want. The film size I want is 127mm. Rhino is showing me 40mm. 40mm/127mm = 0.315. This is your crop multiplier. So if you wanted to see what a 150mm lens on a 3“ x 5” camera looks like in Rhino, you have to specify a 47.25mm lens in Rhino's ViewportProperties.